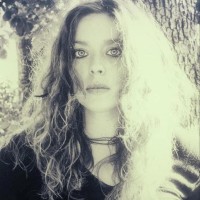 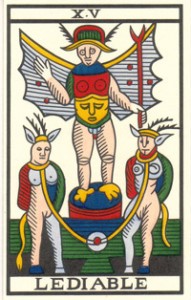 The Devil tarot tends to scare folks. Like “Death”, the card usually provokes an immediate, negative reaction. But, is that totally fair? Is the “Devil’s” appearance in a reading really a harbinger of evil and mayhem?

Alone, the card most often represents something or someone that has an unfair degree of control: for example, a person struggling with drug or alcohol addiction. It can also indicate an abusive person or relationship. If the “Devil” is drawn, it’s definitely not a lighthearted matter. However, like all other cards, the “Devil”’s meaning is influenced by the cards around it. These can amplify or lessen the card’s negativity.

In most decks, the “Devil” mirrors the “Lovers” card. Both are generally taken to mean there is a choice at hand. In the case of the “Lovers” the choice can be between two different people. With the “Devil” it is usually the choice of leaving the controlling substance or situation.

In my deck, the Devil towers over two people in chains. They are not chained to him/her, however. (The figure is not distinctly male or female but a combination of the two). They are chained to one another (and possibly to the pedestal the Devil stands on; it’s not clear). They don’t seem particularly upset about  their situation. In fact, they are smiling. Their hands are behind their backs but are not necessarily tied. If you look closely, the impression they leave is that they’re content and able to untie themselves whenever they choose.

The pair are not so much the Devil’s prisoners as minions. The figure’s bat wings, tails and claw feet make a slightly sinister image but the only thing really frightening or evil about the card is the name.

So: what, beyond choice and control, does the “Devil” mean in a reading? Is it always something negative? No. He also represents sexuality, passion, insight and attraction. Depending on his position and the surrounding cards, he can also indicate the positive aspects of taking control of things.

So, if the “Devil” turns up in your cards, don’t despair. Instead, examine your behavior and the people around you. Do you need to let go of some things? Of some substances? Of unhealthy relationships? If you look at the card closely and listen to the message it carries, it could be the one that leads you to the most positive changes of all.

Elizabeth is a psychic reader, medium and energy worker from Nashville, Tennessee. She grew up in the Hoodoo-infused South and inherited natural psychic a... Read more