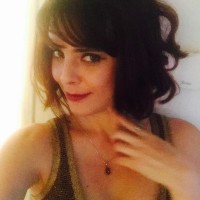 Vanina Armendariz learned to do tarot readings at an early age and has been doing readings for over 15 years.  She started with Spanish cards & then moved on to other systems of tarot.  She is also a clairvoyant, palm reader, psychic medium, and sensitive.  She has been featured on TV  shows as a ghost magnet, due to her ability to see, hear, and feel, and has witnessed overwhelming events as a shaman’s apprentice.

Vanina is a ghost hunter and a member of two paranormal teams: Yussi’s Paranormal, and Claranormal.  She has always been drawn to the occult, so she studied every inch & branch of the occult sciences, becoming knowlegeable in witchcraft, spells, candle preparation, demonology, healing, herbs, oils, occult items, etc.