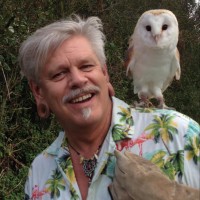 A Fool’s Key to the Cosmos

Painted by a Painter in 1492 or something

My second blog commitment of the month, I’ll be calling “A Fools Key to the Cosmos.”  And surprise, surprise, it’s a Tarot Blog! Today’s post is a prequel to that blog.

In A Fool’s Key to the Cosmos, it’s not my intention to get into monthly Tarot readings, that’s something our Psychic Readers are far better at than I!  I would rather explore the concepts, histories and related landscapes of each card and then see what thoughts and associations we can stir up… both as applies in the mundane world as well as the magical or spiritual reality.

For me the Tarot has become a means to navigate explorations into the very nature of reality and the cosmos… which I might add, has become very bloody complex these recent years!

For those who don’t know, perhaps it would be good to explain my more recent history working with the Tarot.  Some years back, seven to be exact, I started a project to create my own Tarot Deck as a means to bring some kind of order to my Craft Tradition Cosmos.  I figured that by affixing cosmic Tradition concepts/elements to the cards, the act of shuffling the deck allowed Dame Fate and the tides of creation, to have a hand in how the cards may fall, and thus they could express whatever they damn well pleased!  By not locking everything into definitive forms, Gnosis could then also continue to provoke evolution within the Tradition cosmology.

In the Tradition I work, we have a compass-based cosmology already well worked in over the years, with directionally-associated qualities well defined.  So together with Rita, my Craft working partner and a large pap of paper and pencils, we took each card in the classic Tarot deck one at a time and thought, where in our compass cosmos would this card sit.  In this manner we aligned what we knew of the basic feel and meaning of each card with what expressions, qualities and concepts resided in the different directional quarters/stations around our Compass.

We then asked ourselves, given our compass and qualities, how would this card be portrayed to accommodate both the quality of the card in the Tarot as well as the legacy, lore and quality of the direction it carried on our compass.  What then came surprisingly fast and furious was what I can only call a Gnostic Transmission.  I basically sat and sketched card after card, the whole Major Arcana, in one short sitting.  I could not keep up with the flow of imagery that came through.  The rest of the deck came through in exactly the same manner in another single sitting a couple of months later.

What I ended up with was 78 fully sketched-out, large drawings with clear concepts and details all in place.  This deck was pretty much done conceptually at this point, though I would add three additional cards to the Deck during the following year.  My drawing ability however was truly not up to snuff, so the next stage was then to find an artist to work with to translate these concept sketches into acceptable finished works.

The working partner I found to complete this project with was Arnett Taylor, who for me had four basic qualifications…  He was an absolutely wonderful illustrator, he was a practitioner of Traditional Craft, he was willing to let me maintain complete control over the imagery of each card, in fact he wanted me to work with him, hands-on, to get them right!   And last but not least, he was open to doing all this work for free!

Well we had no delusions about what we were getting into.  We went into this knowing that it would be years of work, an enormous undertaking and that no one gets rich from such publications as Craft books or Tarot Decks, though I think we both received so much other forms of reward from the work. I don’t think he’d mind me saying that both his artistry and his Craft evolved through this process — I know mine did while working with this Ced Deck!

This Deck came through Gnostic Transmission and it came through intact and complete with all elements in place. Some of them confrontational and unexpected, but all of them provoking evolution of awareness that demanded growth on our part right from the very start!  The Deck, not me, has been calling the shots and pushing this process!  With its first arrival, it became my teacher and has continued to reveal its deep undercurrent waters in glimpses ever since!

We figured it would take us two years to complete and we are at Seven years right now.  The line work is finished and we have a beautiful black and white deck completed!  I’m looking to print a numbered pre-publication run of 108 to start with, as they stand.  And then use the money raised to get a colorist to work with us to color the deck.  Though many have expressed that they like the deck in black and white.  In the meantime I am putting together a book to go with the deck… of which there will probably be many more books in years to come!

Anyway, pulling from my Deck and the others that I have looked into since the creation of the Deck, I am hoping to write a number of blogs reflecting on the Tarot as a whole.  Reflecting on cosmological concepts as they come up, card by card.

As with my other blog, Across the Counter, my problem will be keeping myself from getting all heavy and convoluted!   My focus is always to mediate insight into what I hold Sacred… and there is the problem… what I hold Sacred is deep and complex… but mediation requires that I make it accessible.  To bridge between these two basic needs requires I be an artist with the written word… and that is yet to be seen!

I am traveling in Europe right now. So I will come out with the 1st Tarot blog as soon as possible, probably next week!

Luck be in the turning,  of the cards that you be dealt!