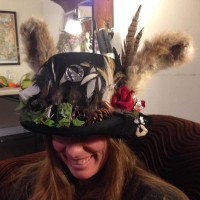 Carrie Wolf Ced is the current Witch Mother and Dame of the Ced Tradition. She is also one of the owners of The Green Man Store. A self-described "recovering catholic", Wolf was born with the Sight which runs in her family lines. Her desire to hone that ancestral gift led her to seek personalized training, which eventually led her to the study of witchcraft. In pursuit of that study, she found her way to the Ced Tradition, learning from Griffin Ced and Rita Morgan Ced and honing her craft. She was initiated into their EarthHaven coven in 2009, and was initiated into the Ced Clan in 2015. The mantle of Witch Mother and Dame of Ced was passed to her directly from Rita a few months before Rita's death in 2019.

In 2010, she and her family members Jill & Joe Weiss opened The Green Man Store with the desire to build a pagan community, and brought Griffin Ced in as Manager. There she makes incense & oil blends, and crafts custom spell candles & mojo bags for customers and coveners alike. She is often found working with Griffin on classes, workshops, special events, and rituals for the pagan community, which has grown and flourished at the store. She also does private spiritual consults, which can be booked by calling the store.

Outside of coven and store, Wolf is an animal lover and an accomplished Horsewoman. Horses, dogs, and cats all share in her life. A wolf lover for obvious reasons, she is a patron of Wolf Mountain Sanctuary for rescued wolves. Wolf is an avid reader and loves the works of Terry Pratchett and Neil Gaiman. She has a wry humor, a quick wit, and a sharp tongue that is almost always planted firmly in cheek.

Hello Green Man Family… Sea Wolf here, aka Carrie. I’m the one that tends to be short on words, nodding sagely next to Griffin during class (when I’m not just heckling him from the corner of the classroom). This, however, is not going to be short on words. Bear with me. What ... END_OF_DOCUMENT_TOKEN_TO_BE_REPLACED