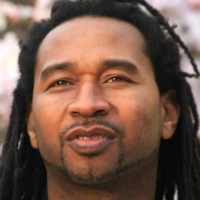 Rene Collins is a magician, spiritual singer/songwriter, actor and mystic.  He has been a student of the occult sciences for over 30 years. His interest began at age 13 when he became interested in the Qi Gong mastery.  He devoted himself to learning the magickal arts in Western, Eastern and African magickal and spiritual traditions. He was first initiated in Thelema system with a a private teacher where he trained in ceremonial magick, yoga, Kabbalah.. He then pursued Eastern tradition including Zen with Blue Dragon School in San Francisco. Along with those teachers he became interested in Taoist philosophy. He study various types of martial arts including Choi Le Foot, 8 Step Mantis, Jeet Kune Do, and Capoeria which he holds a advance green belt. In Brooklyn NY  he served as High Priest of ATOTA (A Temple of The Apotheosis) in Brooklyn NY where he co-wrote and lead Pagan rites in Prospect Park for many years. He also was High Priest of Body Temple for 5 years and taught his own magick and medication classes to the community. He currently teaches spiritual development at Breathe Rehab Center and recently released the book Way of the Magical Intelligence. He is currently a student of the Ausar Auset Society, Orion Foxwood, and walks the path of Vodou as well. Rene is a member of the Patrick McCollom Foundation, and resides in Los Angeles, CA with his family but often teaches in New York.

Meet Rene Collins, who will be teaching a Magickal Qi-Gong class at The Green Man!  Click here for details: https://thegreenmanstore.com/event/qi-gong-rene-collins-fourththurs/2018-05-24/ ... END_OF_DOCUMENT_TOKEN_TO_BE_REPLACED