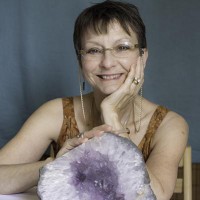 You know how we call all facial tissue “kleenex” and all copies “xeroxes”?  To the despair of the fine people at Puffs and Minolta and other companies, the brand names Kleenex and Xerox have become the common name for the product, no matter who produced it.  “What the heck does this have to do with crystals?” you might ask.  Well, the same kind of thing is happening with the name Herkimer.

Herkimer Diamonds are naturally double-terminated quartz crystals.  (“Naturally” means they are not cut and shaped by people; they grow that way.)  They are probably the most clear and pure quartz you’ll see.  And they are found only in Herkimer, New York.  That’s it.  That’s the only place Herkimers are from.  However, there are literally tons of other naturally double-terminated quartz crystals from many other places in the world.  They have the same qualities as Herkimers, and often are just as clear and beautiful.  But they are not Herkimers.  They might be Herkimer-shaped but they are not Herkimers.

So let’s agree for this blog, at least, to call all double-terminated crystals DTs.  It’s faster to type, anyway. 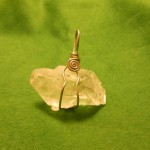 DTs don’t grow on a matrix of sandstone or quartz like most crystals.  Growing in pockets of clay allows them to have a point (termination) on each end.  They are more rare than “regular” quartz crystals, but not so rare that you can’t obtain them.   In fact, there’s a cute store in NoHo that has a whole dish of little DTs and some fabulous necklaces….  😉 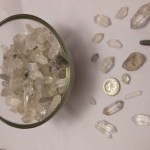 Imagine you’re holding a single-pointed crystal as a wand, and moving/directing energy with it.  Now imagine you’re holding a DT; the energy can flow not only out but back to you.  I think that would make a DT a great addition to a mojo bag or spell for clear communication and understanding.  It would be great as part of a gift expressing love and connection.  With that kind of two-way energy, DTs can help one see both sides of an issue.  Griffin feels that DTs can bring two energies into cohesion, into a relationship with each other.  I asked him for a “for instance” and he said, “If you want to work with the energy of an ametrine but don’t have one, you could put a DT between an amethyst and a citrine, and synthesize the energies of the two.”  Cool! 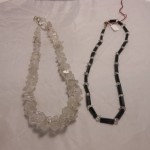 I would think a DT would be great for a performer who not only wants to relate to the audience but also wants to get feedback and energy from fellow performers and from the audience.   Might be useful for readers, teachers, healers – anyone who needs the flow of communication to go both ways.

As always, I’m eager to hear about your crystal experiences.  Have fun!

**Please note each Blog is the unique expression of the Blogger and does not speak for The Green Man as an entity…but rather is one of the many diverse colours that make up our Green Man Tribe.**